From the beauty of Chiang Mai, Thailand, we left heading north then east, bound for a border and river journey into the heart of Laos. With new friends by our side we stocked up on a few essentials and prepared for the cruise that would take two days down the Mekong, stopping only to spend the night in a remote village perched on the edge of the swift moving muddy water. The trip down the river was beautiful; with time on our side we were afforded scenes of towering limestone peaks jutting up out of the landscape like lost teeth, remote villages reached only by boat, and slowly spiralling whirlpools our captain kept only faintly out of reach. After many hands of cards, chapters of our books and stories later, we arrived at Luang Prabang in the heart of Laos. Once under French colonial rule, the heart of this old city still holds on to many architectural pieces influenced by the time, and is now recognized as a UNESCO world heritage site. We spent our days touring around the city and then its surrounding countryside, enjoying waterfalls and swimming holes by day and the food, culture and people by night. With hidden bars tucked over the river, colonial architecture, croissants and sprawling night markets, the city offers a beautiful blend of old and new as two cultures mesh into one unique urban atmosphere. It was a warm welcome to the country, and definitely a city we’d return to in a heartbeat.

Since we had run out of river boat options, we were left with limited options to head south to Vang Vieng and ended up on one of the more harrowing bus rides of the trip thus far. Unfortunately, as a local later explained, corruption runs rampant in the road building industry in Laos, and more often than not the funds allocated to the winning contractor end up being used for only half of the agreed upon work; the other half is used to pay off those that helped said contractor secure the work in the first place. Unfortunately those that suffer the worst of the consequences of these backdrop deals are the likes of us, and any other motorist on the road. It’s a wonder that the bus had any shocks left in it at all by the time we finally reached our destination.

A very touristy town which has built its reputation renting inner tubes and hot air balloon rides, Vang Vieng thrives on churning the tourists through the natural wonders and beauty that surrounds the small town. Unfortunately as the hours creep on into the evening and the drinks keep getting poured, some of the less admirable traits of travellers come out, and at times, you aren’t sure if you’ve been transported to an all-inclusive resort in Mexico or an LA nightclub. With a good set of earplugs and a reminder that you can act over the age of 21 however, Vang Vieng is still a glorious spot worth the stop on your travels through Laos. We spent our two days there biking through rice fields to azure blue swimming holes, floating casually down the river, exploring stunning caves with hidden temples and enjoying all of the local treats the street vendors had to offer.

With a growing idea of what our next adventure might be we made way for Vientiane, Laos’ capital city in the South. Plane tickets in hand for Hanoi two days later, we spent our last days in Laos exploring the city and learning a little more about the country’s history. Although we had read snippets of stories in our travel guide and rumours of the problems the country’s people still face today, we had no idea for what was in store for us when we visited the COPE center, a facility created by a not-for-profit dedicated to the manufacturing, education and distribution of prosthetic limbs for those affected by both the Vietnam and Secret War between 1964 and 1973. During those years, the Americans completed more than 580,000 bombing missions, making Laos the more heavily bombed country in the world per capita. Over 2 million tons of ordinances were dropped on the country, many of them cluster bombs containing dozens of smaller ‘bombies’ inside, set to detonate either upon impact, or through a variety of either trip-wire or time clock mechanisms. With only a 70% detonation success rate, approximately 80 million of these ‘bombies’ remained undetonated throughout the countryside following the war. More than 20,000 people have been killed or injured as a result of unexploded ordinances incidences in the post war period between 1974-2011, and today approximately 100 new casualties occur annually. COPE has done an amazing job in the country thus far to help rehabilitate those affected by these ordinances, and to educate the population on proper recognition and reporting of those remaining in the field. While Canada has never used cluster munitions, they are still available and used in war around the globe today. Warfare is a powerful and indiscriminate means to an end, and it was eye opening and powerful to see a country still in the recovery stages of a battle largely unknown to us both.

We enjoyed our visit in Laos, but if we returned we would do it different. I think this spectacular country has a lot to offer if you wander off the beaten track, which is unfortunately what we failed to do. But with a little bit of luck we’re going to try and avoid making the same mistake again; once we land in Hanoi we’re setting out to find bicycles, and if all goes well we’ll set off what should be the most challenging adventure of our trip so far as we  attempt to bike from Hanoi to Ho Chi Minh City, a distance of over 1600kms. With too much gear and not a lot of money to spend on bikes, no matter the outcome I know it will be a journey we’ll never forget. 🙂

Our trusty riverboat that guided us down the Mekong 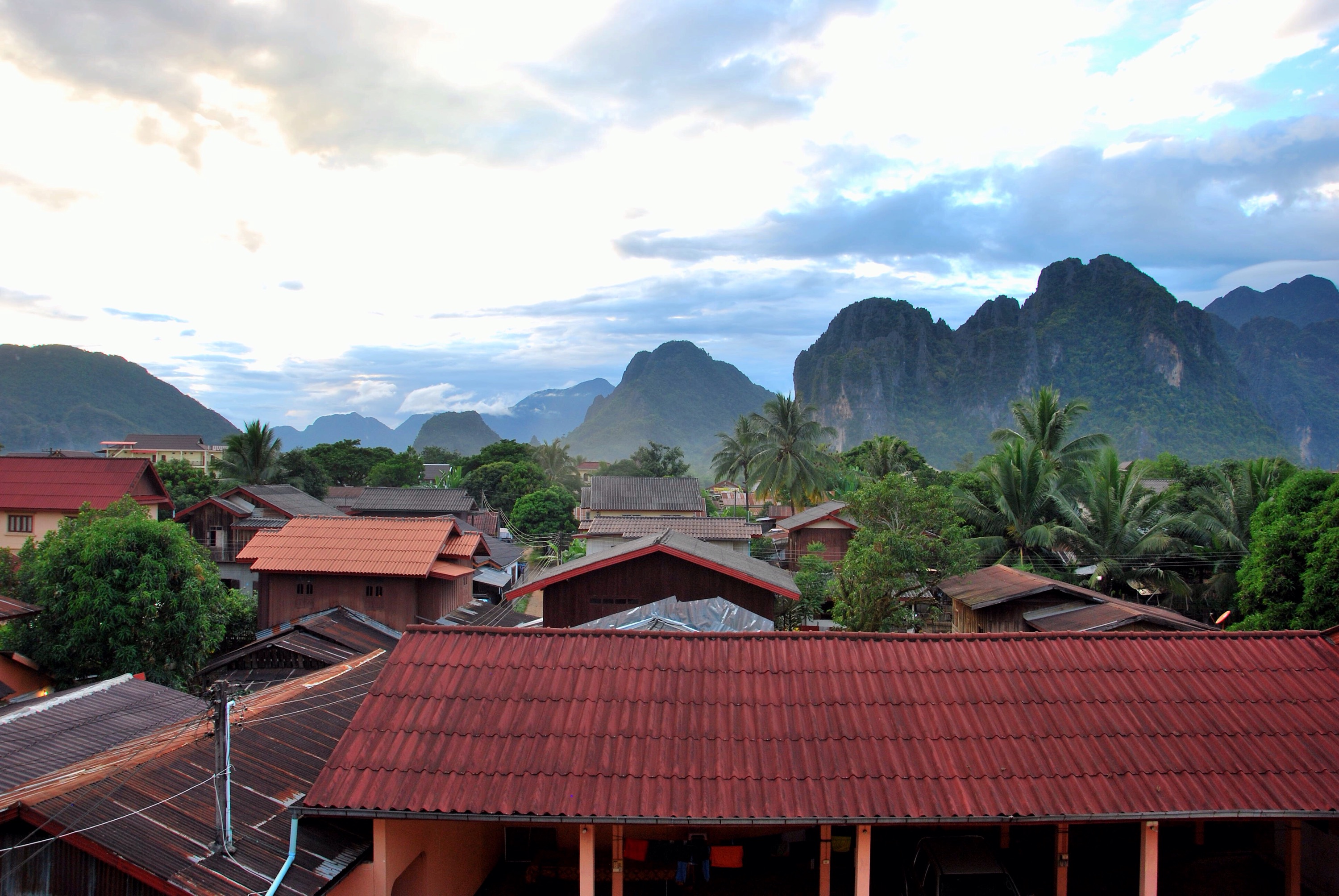 Our view over Vang Vieng

A sun bear surveys his domain at the bear sanctuary outside of Luang Prabang, where those seized from paochers and illegal traders are brought

On the streets of Luang Prabang 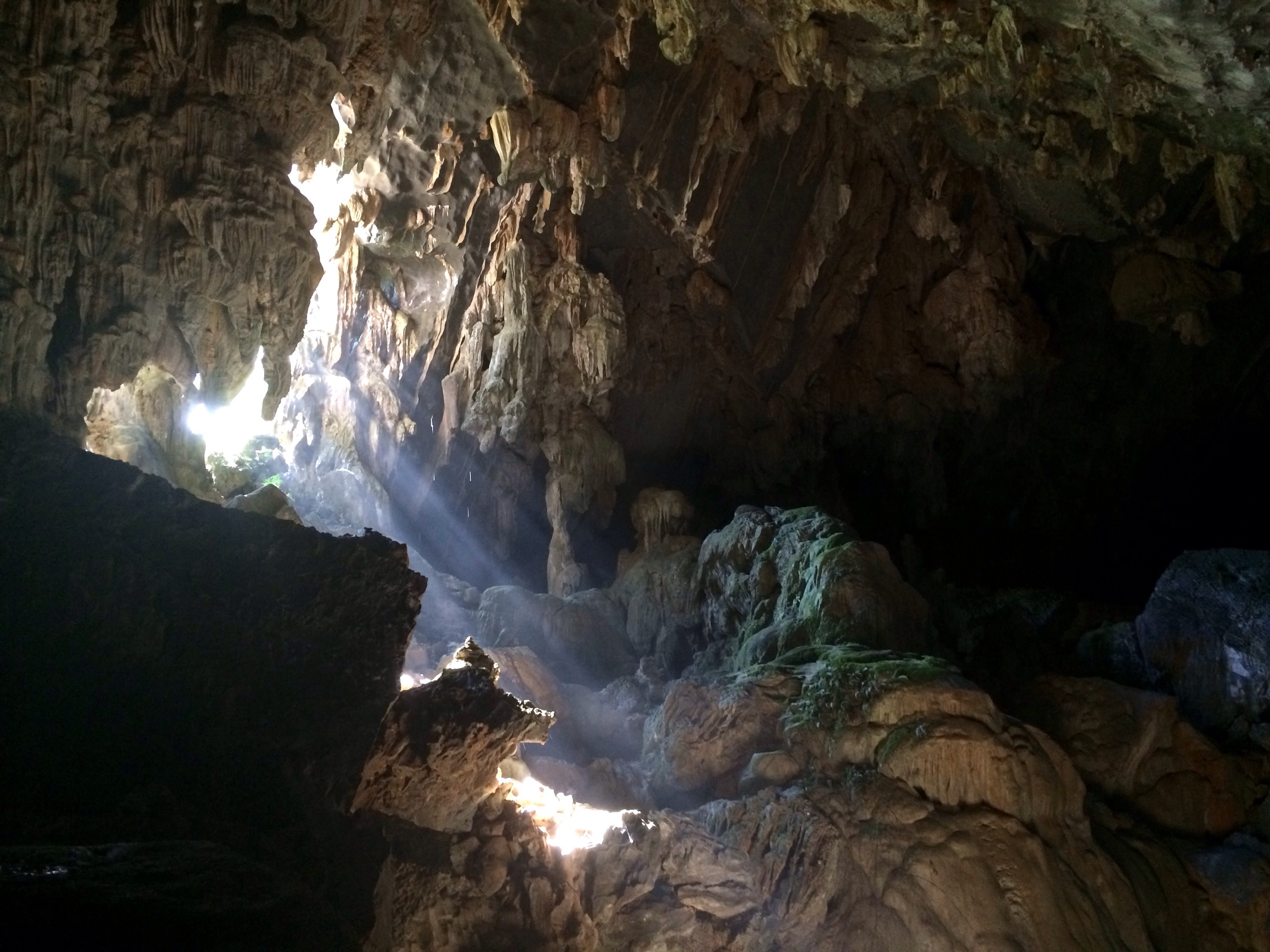 Being a tourist and loving every minute of it… 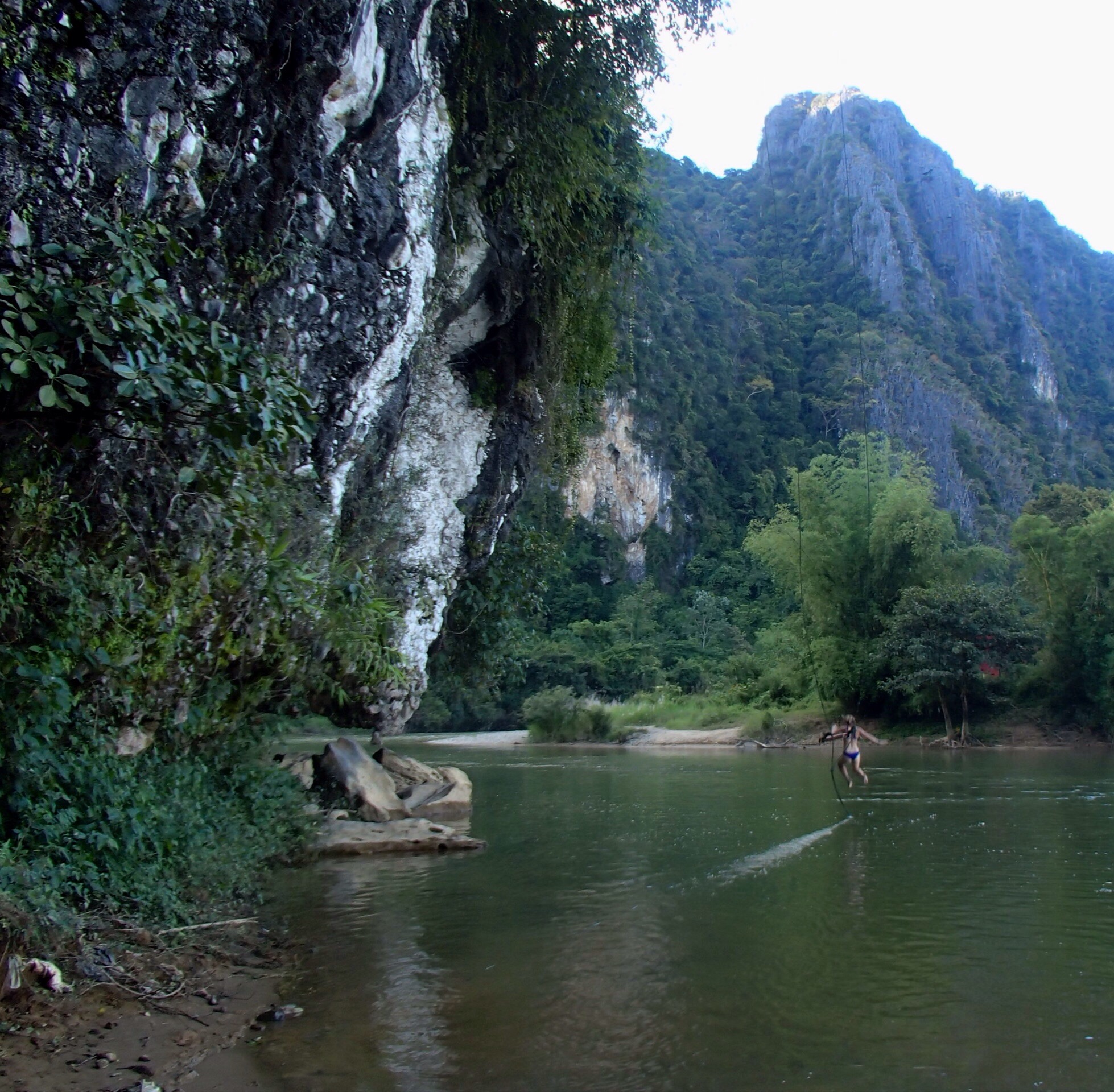 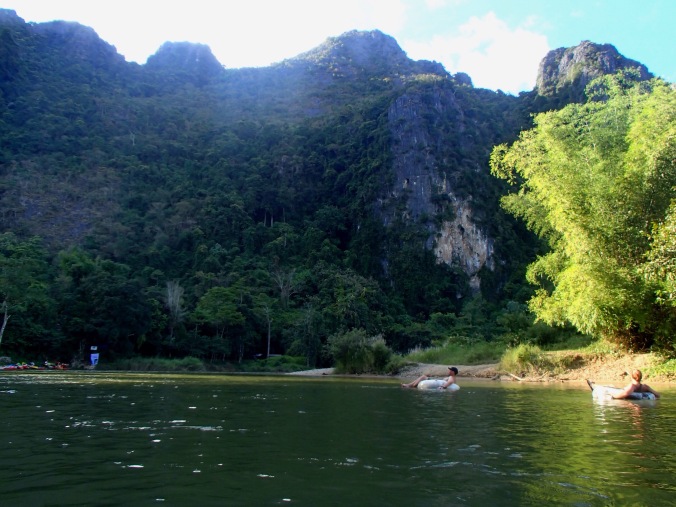