If only the summer could last just a little bit longer, I think we could stay in the North forever.  Unfortunately, after a month and a half on the road exploring the wild, the weather began to turn and the cool nights prompted us to start looking south again. After leaving spectacular Kluane National Park we headed south for Haines, our last sojourn into Alaska for the time being.   Although the cooler weather kept my arms tucked securely under the duvet at night, it also brought the bounty of migrating salmon, and with them, those that feast on their return.  For hours we sat upon the river banks surrounding town and watched as bears themselves watched the waters, combing the shores for that which will help sustain them throughout the winter as they hide from the cold dark days in their dens.  Absolutely fascinating, beautiful and brilliant beings, the bears we saw on the latter half of our trip illustrate the power nature holds and the strength of survival in a climate so variable and harsh.

After a few days exploring the area on our own, we met up with some old friends for a night of socializing and tasty home-cooked food.  Seeing family and friends, old and new, has been a highlight of the trip up North; one of the biggest banes of limited holiday time when you are working is trying to find a balance between spending your hard earned vacation days on yourself, and also fitting in visits with everyone in your immediate (and sometimes extended) family too. Without this deadline, the conflict for us has been erased; not only have we been able to commit a healthy amount of time to ourselves, but also to spending as much time as we can with those we love along the way.

Departing Haines by boat, we left our wilderness trekking and travels behind and began to make the journey south.  Itching to get back on our bikes, we made way for Carcross, a small town southwest of Whitehorse, where the Carcross/Tagish First Nations youth have developed an amazing network of mountain biking trails.  Although the weather wasn’t in our favor we persevered (there’s a great little coffee shop in the main square where you can warm up after a particularly cold and wet run), riding the trails with namesakes such as ‘Wolverine (in the woods), ‘Grizzly (charging steep lines), ‘Goat’ (technical rock lines) and AK-DNR (think Pseudo Tsuga for those of you who have ridden Squamish) for three awesome days.

From Carcross we headed south into our home province via the Cassiar Highway, a beautiful and much lesser-traveled route through Northern BC that parallels the boundary of the coastal and interior mountain ranges with (thankfully) much less road construction and potholes than it’s sister highway to the east.  After making a side trip to visit the spectacular Salmon Glacier west of Stewart (omit the note about better roads here) we continued on to Terrace, the first stop on what would become a week of amazing riding in the region.

Terrace has a few different spots to hit the trails, and the type of terrain you find varies greatly.  Copper Mountain was the talk of the town though, and much to our delight it lived up to expectations (Trailforks said STEEP and they meant it; think Cypress Mountain for those of you that ride the North Shore).  We spent the afternoon with adrenaline coursing through our veins as we rode the mountain and brought home a few bruises to boot.

After saying goodbye to Terrace we headed for the coast to visit some dear friends in Prince Rupert who not only gave us use of their cabin while staying in Terrace, but allowed us another night under a dry roof along with a hot shower, good food, and a few glasses of craft beer from the local brewery.  Seeing and meeting those along the way who also love to travel and explore the world brings a smile to my heart, as it only feeds our addiction and enthusiasm and makes me excited for all of the adventures that still await us.

From the coast we headed back inland to Smithers, a beautiful little alpine town surrounded by high mountain peaks, world-class fishing rivers, and a few more mountain biking trails to boot.  Fortunately for Byron (but unfortunately for me) a stomach bug kept me from riding that day, so he took advantage of my offer to shuttle while he checked out the local dirt.  Huckin ‘Eh turned out to be the day’s favorite, so while I curled up to play countless rounds of Angry Bird (yes, it still exists), Byron coated himself with mud and grit, claiming it to be one of the best trails of the trip thus far (a statement he still stands by too).

Whether it’s just local rivalry between competing trail builders or town councils I don’t know, but as i’m sure its becoming obvious, you don’t have to go far in the region to find more mountain biking trails than you can ride in a day, maybe even a week.  From Smithers we made the quick trip to Burns Lake, the second to last of our stops on our southwards journey home.  With a beautiful little rec site and lake awaiting you at the base of Boer Mountain, bikers can shuttle or pedal up the mountain and do endless laps throughout the day.  Those that enjoy a little more speed and structures can check out the likes of ‘Charlotte’s Web’ (fast, steep and flowy) and ‘Water Lew’ (an impressive amount of woodwork), while those looking for a longer cross country ride can spend the day out on Razorback, although be warned, I think there was more up than down.  After two days the rain found out where we had moved to, and we decided it was time for a hot shower and some rest.  Heading into Prince George was almost a shock to the system after our time up North, where one is more likely to see more moose than traffic lights on your daily commute. Nevertheless we quickly adjusted, and spent the evening enjoying a bounty of craft beer and delicious food from The Copper Pig, a great little BBQ joint in town that I highly recommend for anyone passing through.

Will full bellies and clean clothes we set off on the last few days of our Northern road trip, with the frequency of familiar places and faces quickly replacing the nights of solitude and days in the wild we had become so accustomed to. Not wanting to miss one last opportunity to ride, we made a stop in Williams Lake, where the trails rivaled any of those found in it’s neighbouring towns of the north.  Let me just summarize it this way: if you’ve always wanted to ride a suspension bridge on your bike, I highly recommend making the trip.  Like surfing a wave on the ocean, there’s something quite unique about the ground underneath you moving as you move, swinging under your weight and rolling tires as you traverse the boards strung high up over a gulch.  If that doesn’t suit your fancy though you can always hang back and practice your wall rides and moves on the teeter-totter, the latter of which I was much more comfortable on.  There’s something about being perpendicular to the ground on my bike which I haven’t quite mastered yet.

With that one last stop we came full circle and have now landed back in Vancouver for some rest, laundry, and family time.  In a few days we’ll make our way east to pick up Winter (video requests of our reunion have been stated), then we’ll start the drive south to the Baja.  From there we are planning to fly overseas (Kathmandu is the rumoured destination at this point!) and our adventures will continue.  We look forward to seeing as many of you as we can along the way, and continuing to share our adventures as we go.

A sow and her two cubs comb the tidal shores of Haines, AK, in search of salmon and other seafood snacks 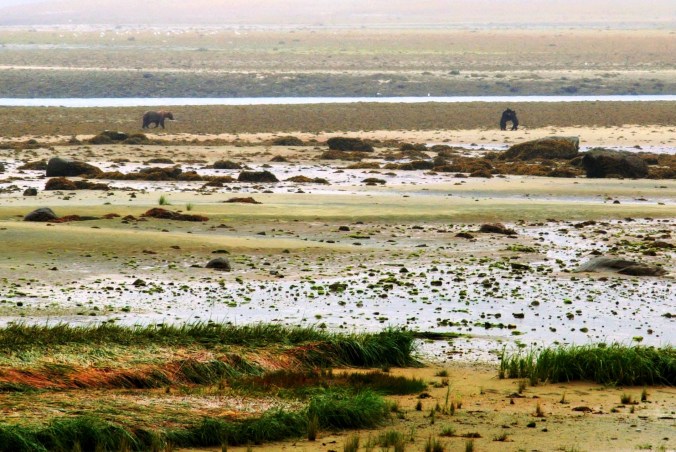 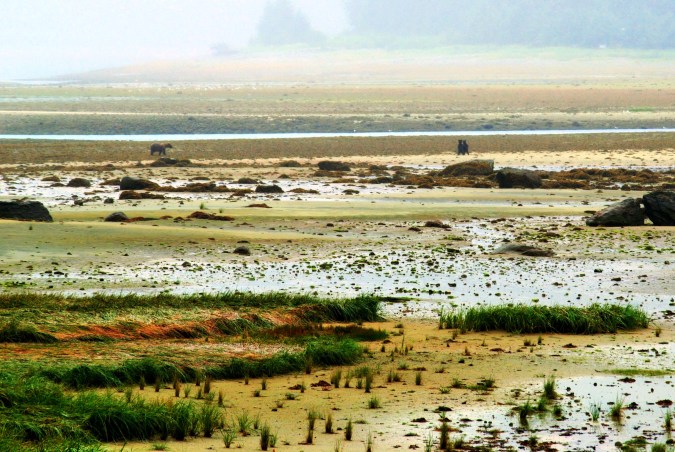 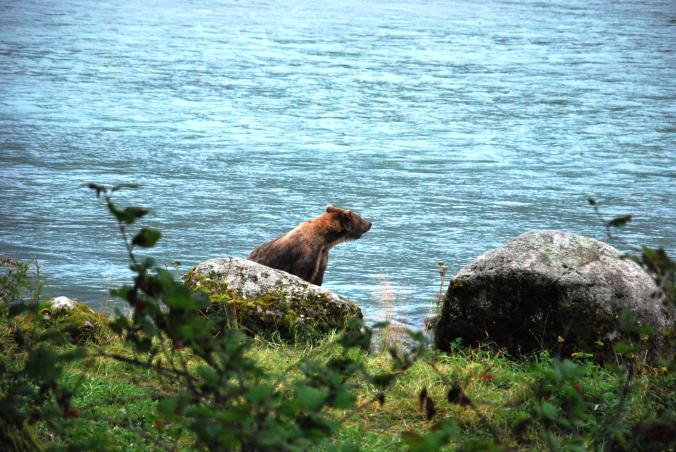 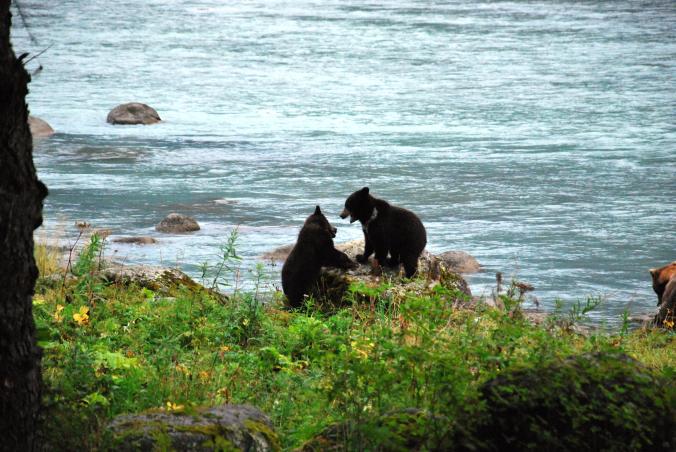 While the cubs goof off and brawl on the shore behind.. 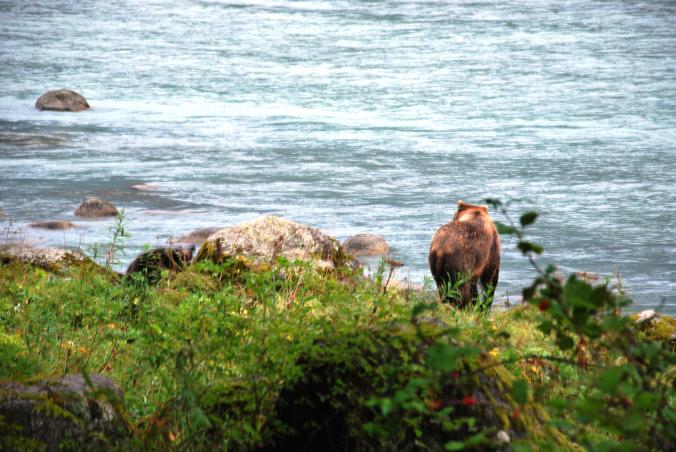 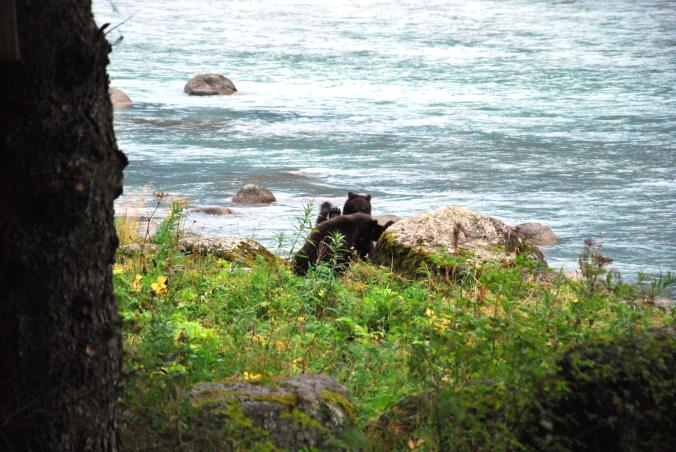 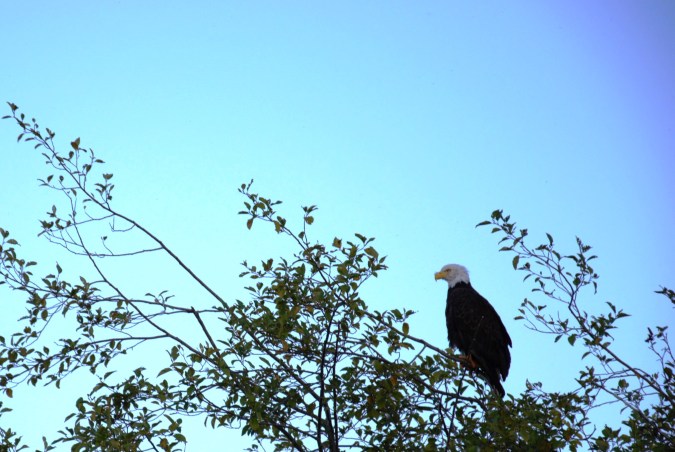 An eagle watches the river mouth for dinner at Lakelse Lake, BC 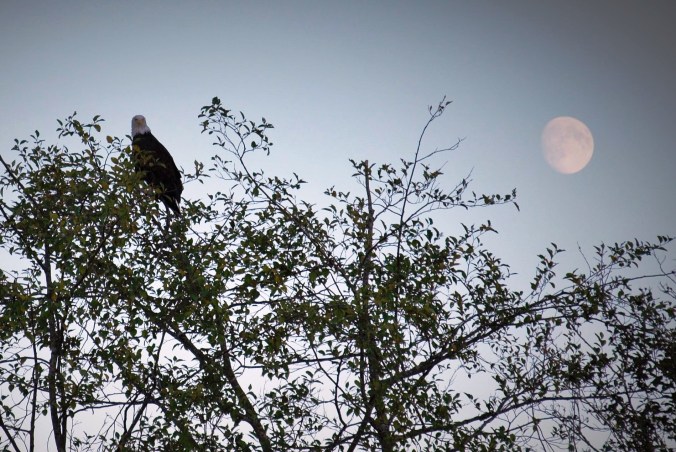 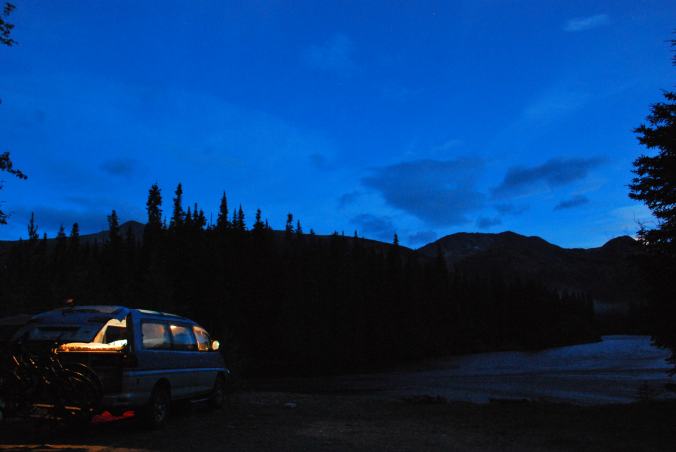 Back to BC, and free rec-site camping. 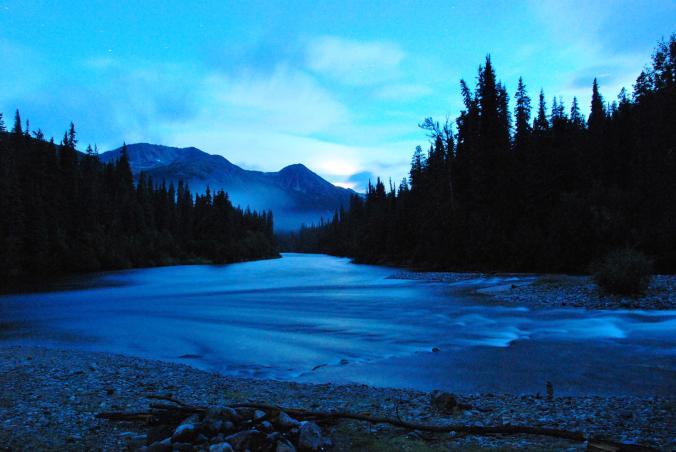 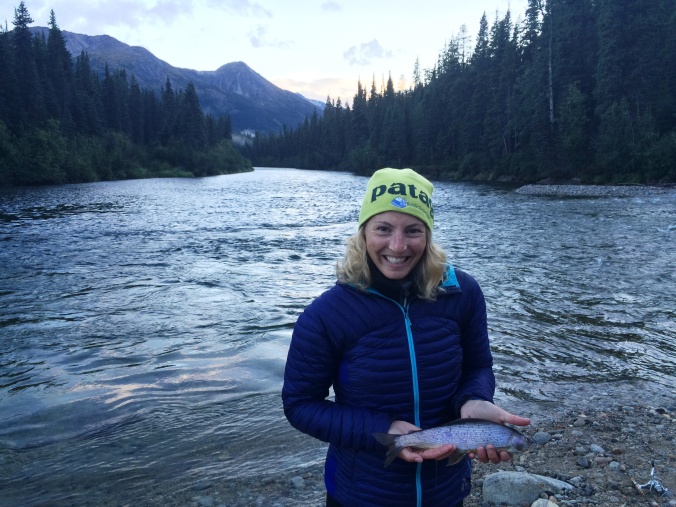 The bears and eagles weren’t the only successful ones.. 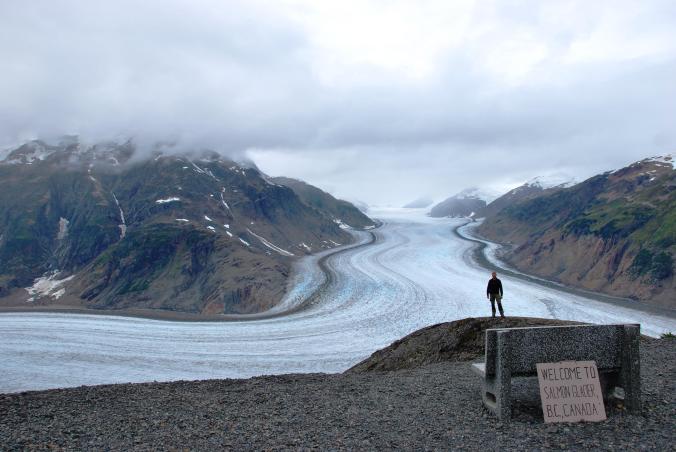 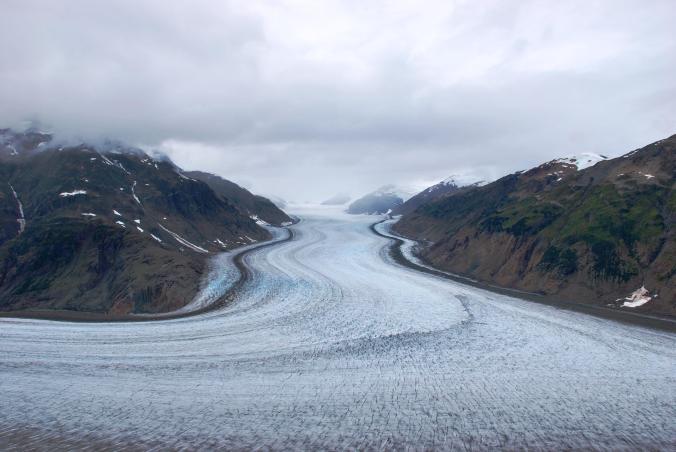 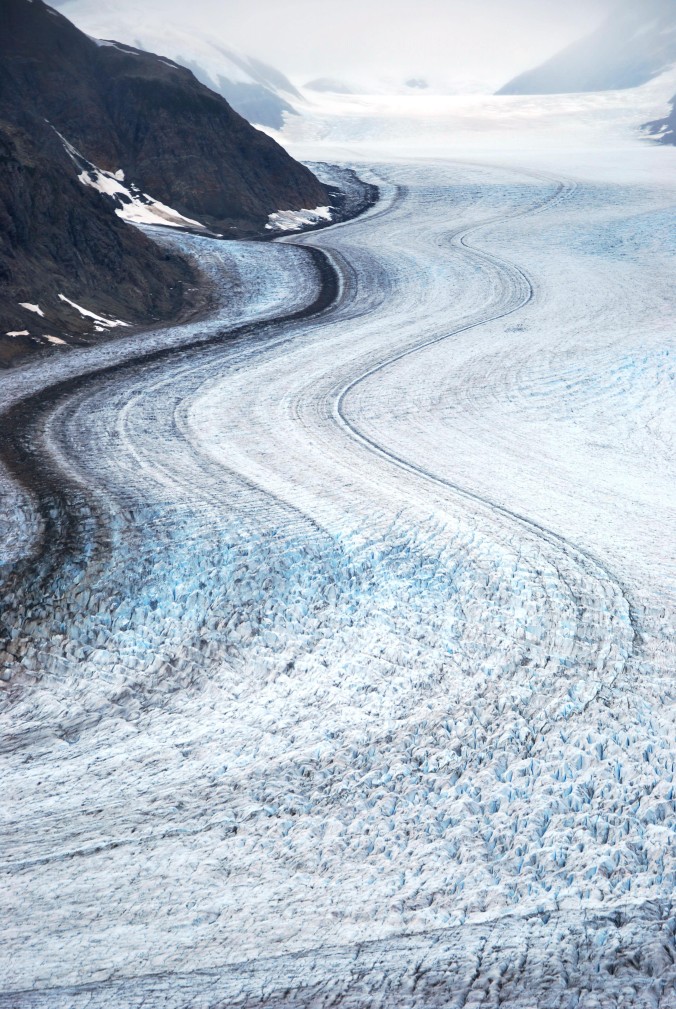 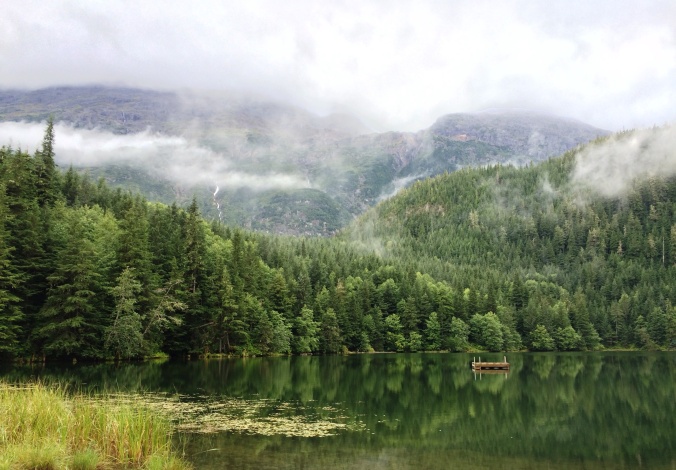 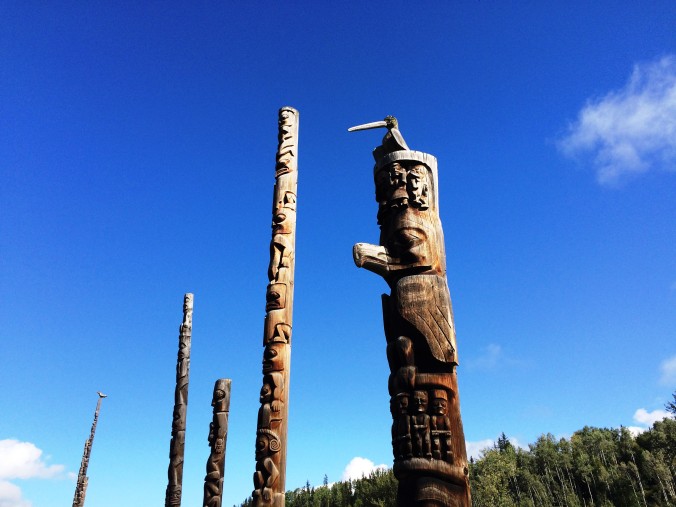 Stopping to admire the historic totem work in Gitanyow, BC. 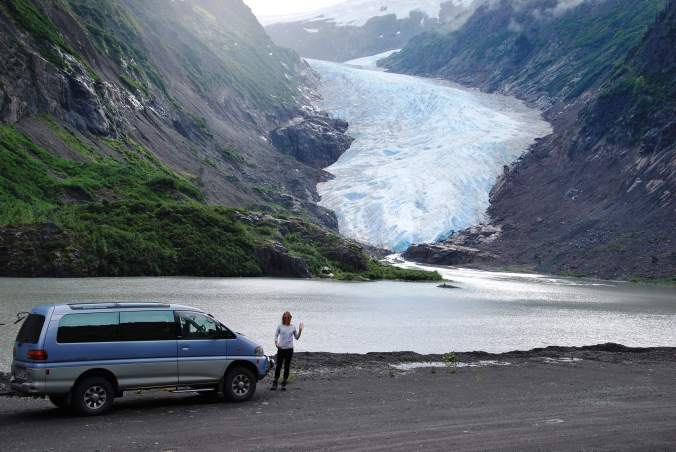 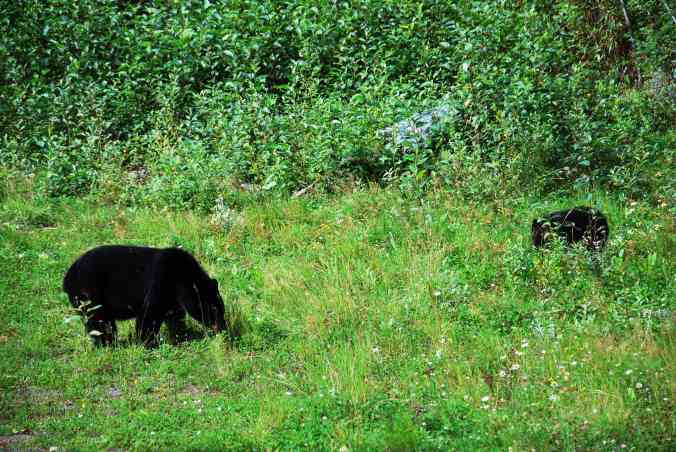 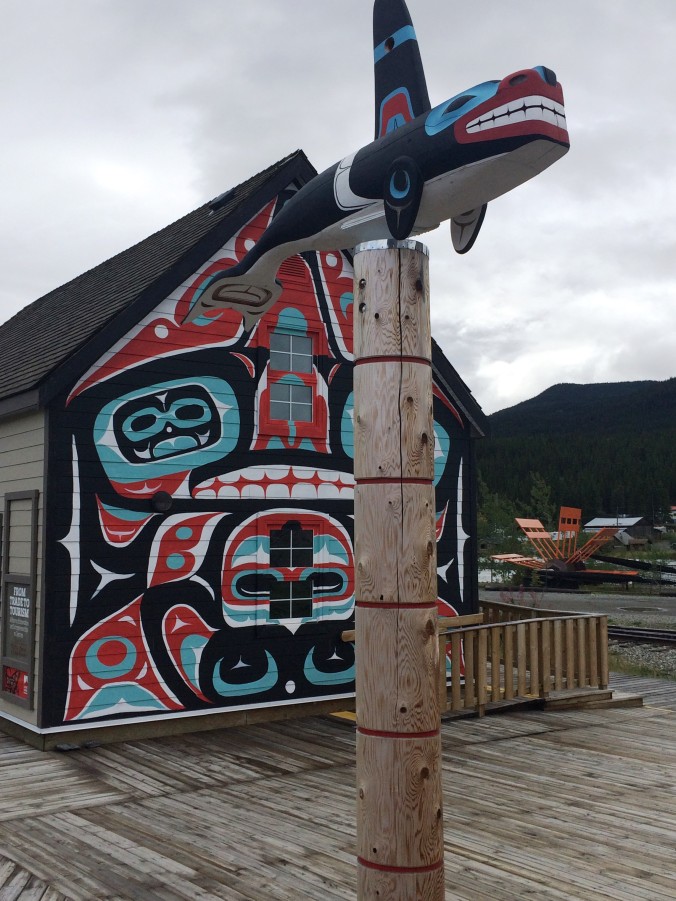 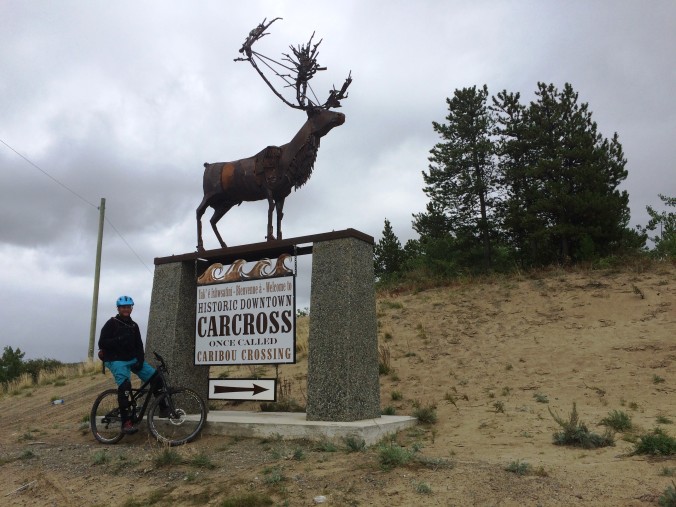 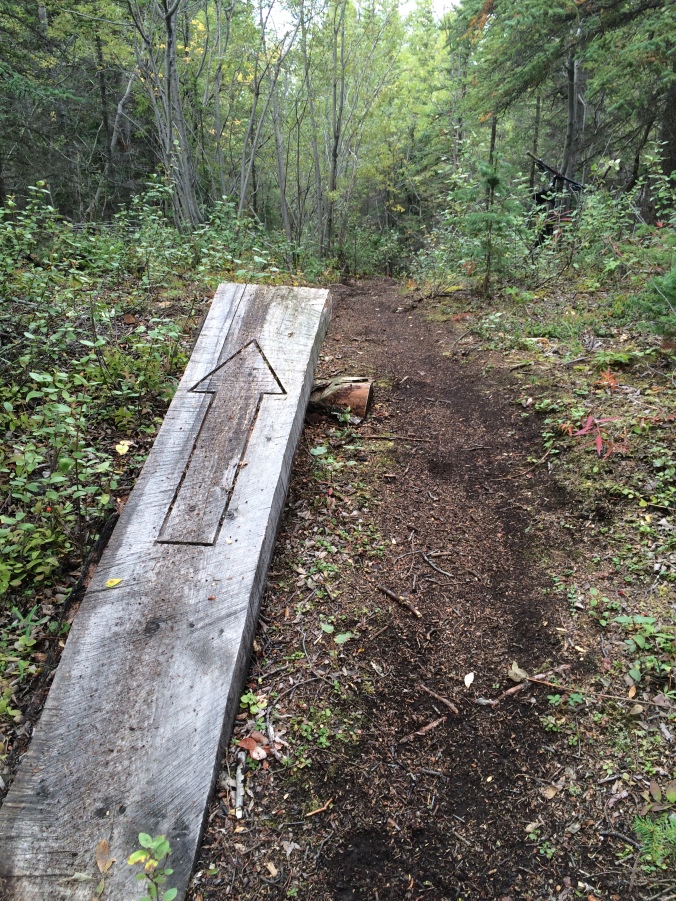 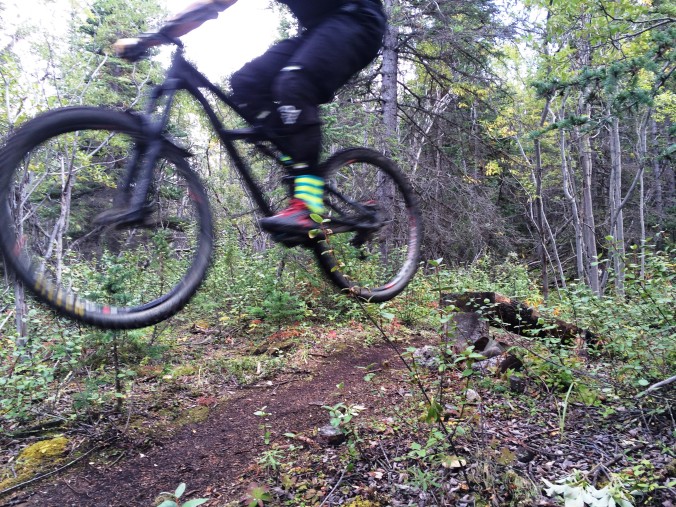 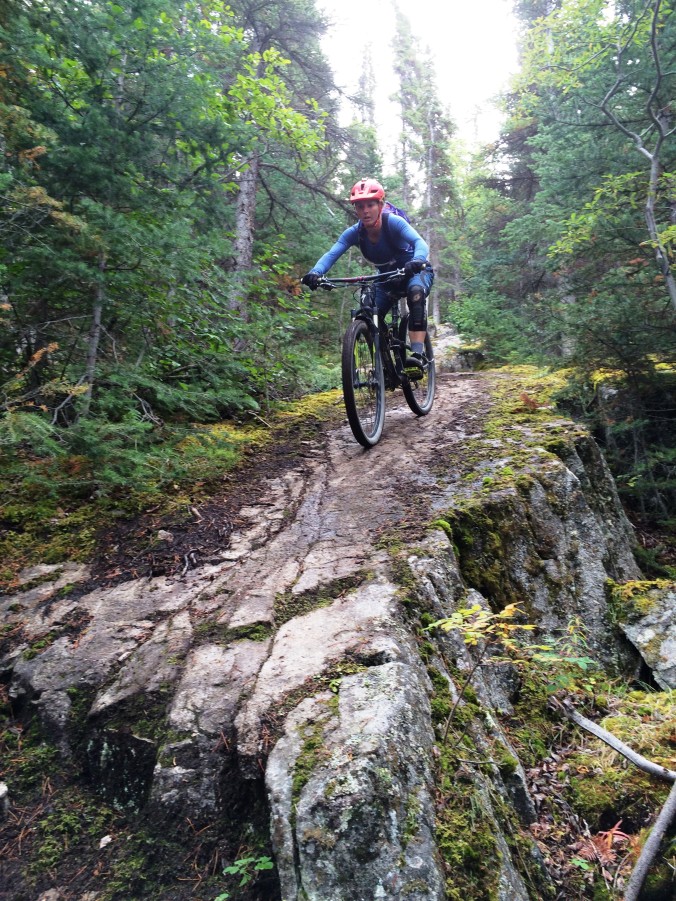 Navigating the end of the rock slabs on ‘Grizzly’ in Carcross, Yukon. 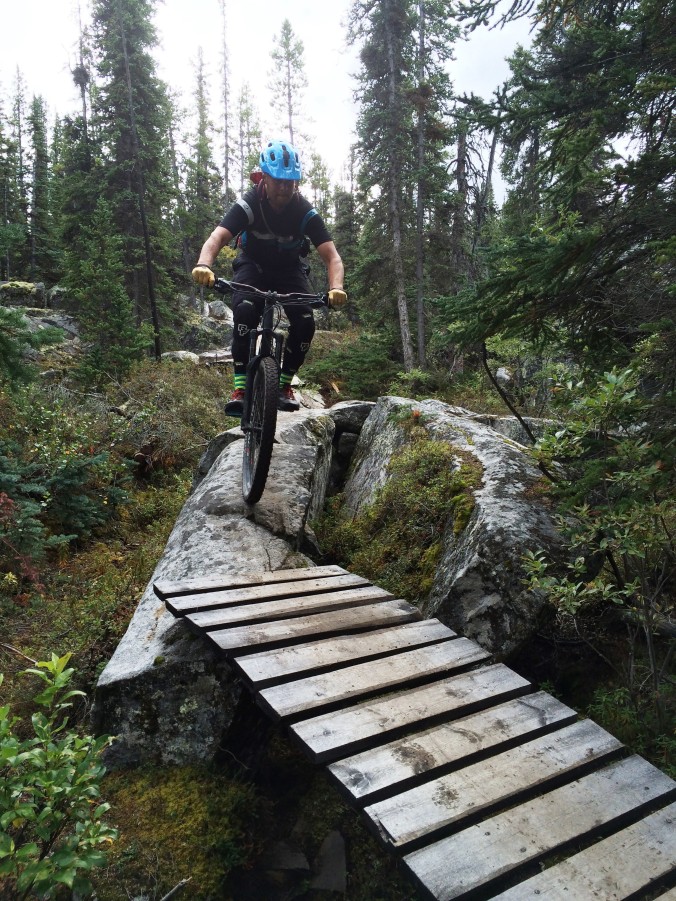 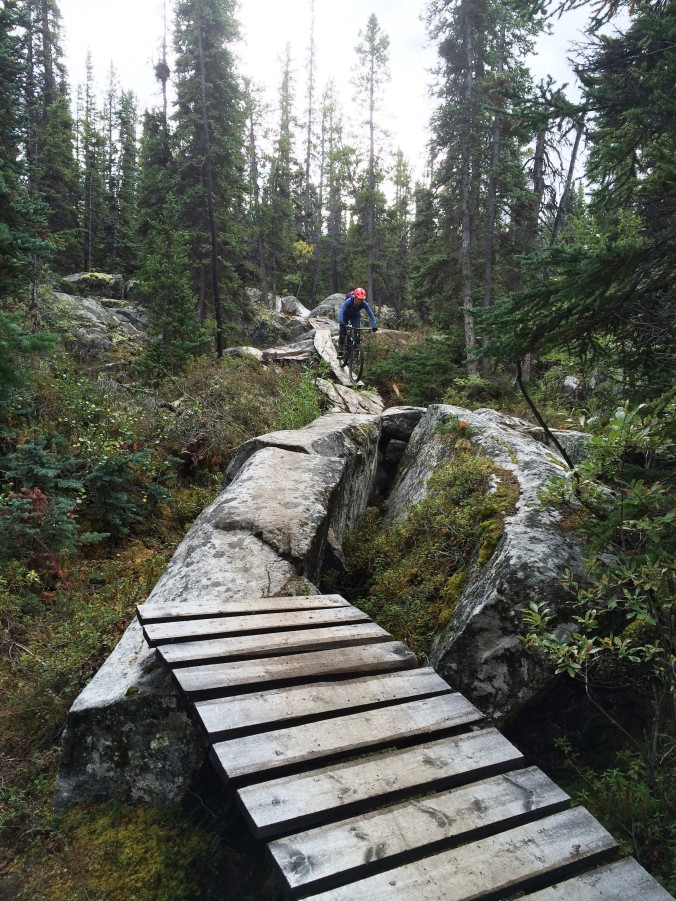 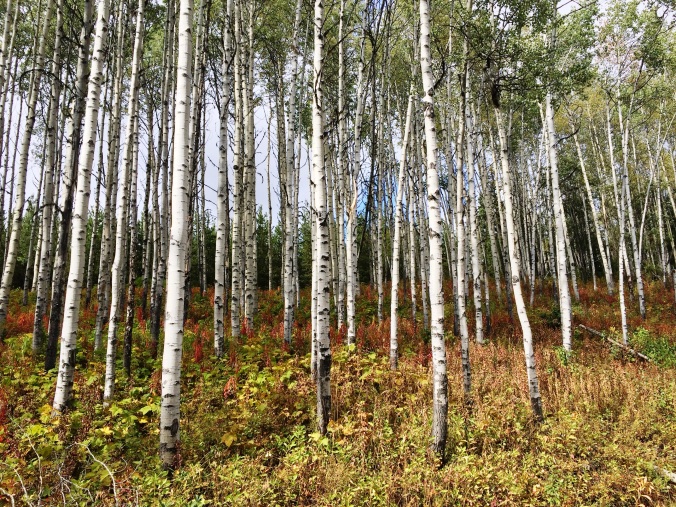 The forest starts to show its fall colours in Burns Lake. 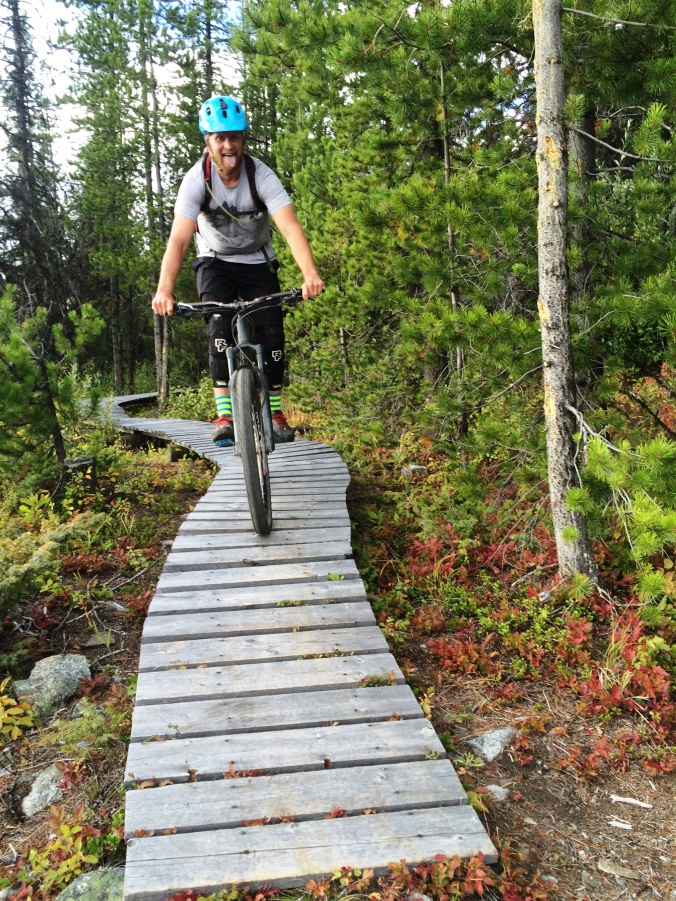 Playing on the trails above Bohr Mountain in Burns Lake, BC 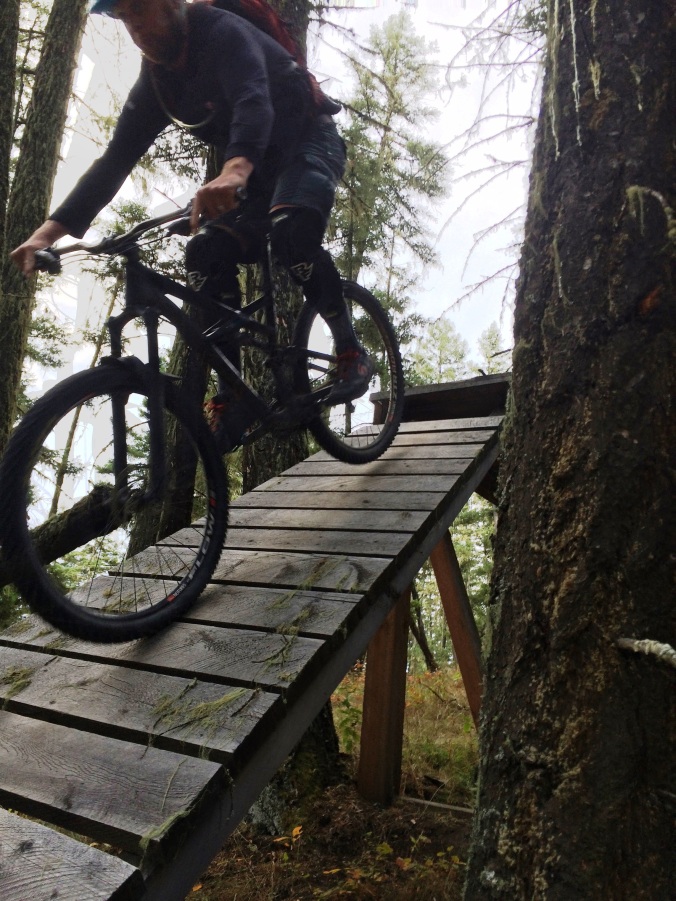 Byron tackles the woodwork on Snakes and Ladders in William’s Lake, BC.